Hey!! I'm so excited about this idea. Every month we're going to be giving you short writing pieces based on pics Bronwyn and Jessica picked out. This months' pic is totally awesome. Hope you enjoy my short piece. 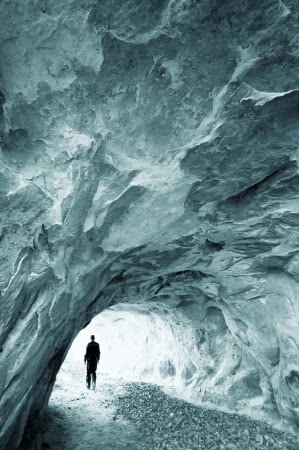 Cold sweat ran down his back as he approached the dark mouth of the ice cave. The same cave he almost died in a year ago. Cole shoved the thought aside. He couldn’t allow the memories to surface. If he did, he’d never go in. If he never went in, he’d never finish what he’d started. And it was imperative he finish. The longer he waited, the more intense the dreams became, and that’s what had started everything. The dreams.

He’d started dreaming about the cave as a child, only flashes, but he remembered every detail. As he grew older, the dreams became more intense, as if something called to him. He’d started his search for the place at twenty-five, by that time the dreams were so overwhelming he couldn’t focus on anything else. It had taken two years to finally locate the cave. He still couldn’t believe he’d found it. For most of the search, he thought the place was a figment of his fractured imagination, since he was convinced he was going insane.

When he’d finally found the cave of his dreams he’d wept from relief, from ecstasy. Finally, finally, he would walk through the place he’d only visited in flashes. He hadn’t taken his time; he’d been reckless though and rushed in without any thought to safety or caution. He’d walked through the cave so many times in his dreams and been safe he hadn’t taken into account the danger of reality. Cole had paid the price by losing his footing on the ice and sliding into a deep pit. It had taken too many days and too many people to finally extract him for him to walk away unscathed. His injuries were numerous and he’s spent a long time in a hospital and even longer in physical therapy. Through it all his constant focus had been the cave. He had to get back. Had to see. Had to find.

He turned on the lamp embedded into his helmet and stepped into the eerie blue-white world. From his previous visit, he knew the floor was extremely slippery so he dug his cleated boots in as he cautiously moved forward. His light danced over the walls as he fought to keep his breathing steady and even. As with the first visit, he was overwhelmed with the need to rush forward, but he held himself back. Whatever he was searching for had been waiting a very long time, but he wouldn’t be foolhardy again.

A break in the ice he hadn’t noticed before appeared to the left and he knew this was where he had to go. He played the rope he’d secured around himself out as he stepped forward. This time around, he’d made sure of his safety by attaching a rope to a series of ice screws. This trip wasn’t going to end like the last one.

Squeezing through the opening, he stood for a moment taking in the absolute silence. It was eerie, but relaxing all at the same time.  He couldn’t remember the last time he’d been alone. After the accident, his friends and family were with him constantly. He understood their concern, but when he couldn’t even go to the bathroom alone without someone hovering he’d lost his patience.

Now he stood alone and felt the last bits of tension melt away. Slowly, he moved down the tiny corridor. With each step, he knew he was approaching what he’d dreamed about, his destiny. He’d always known, deep down, his heart’s desire would be found in this cave. The problem was he couldn’t tell anyone what that desire was. Perhaps a need to belong somewhere? A need to be loved? He wasn’t sure, but knew it was here in this place.

As he neared a bend in his path, his heart rate sped up. He recognized the spot. He dreamed of it and everything looked the same. As he stepped forward, one of his boots slid out from under him and he went down hard banging against the wall. Before he could catch his breath, the wall at his back gave way and he was sliding backwards. Terror filled him, as he scratched and grabbed for purchase. Nothing he did worked as he gained speed. He tried to hold the rope around his waist, but it slipped between his gloved hands as if covered in oil.

The light on his hat danced wildly as his wild ride ended. He found himself on his back in a small cavern. He panted attempting to calm his racing heart as spots danced before his eyes. He wasn’t dead. The thought raced through his mind. He moved his arms and legs. He wasn’t hurt either. He closed his eyes and sent up a prayer of thanks.

He sat up and rolled over so he could to get to his feet. From his peripheral vision, he saw movement and turned. A man crouched in a small opening Cole knew hadn’t been there before. White-blond hair tumbled over the man’s wide shoulders as piercing blue eyes studied Cole closely.

Cole knew him. This man had been in his dreams too. Hadn’t he? Cole wasn’t sure anymore. Hell, maybe all of this was some fevered dream his brain had created. Maybe he was locked in some hospital somewhere and all of this was just a hallucination?

Now run over to check out the other pieces from Bronwyn Green, Jessica Jarman, Kris Norris, Kayleigh Jones, and
Jessica De La Rosa.

See you next month for the Flash and this coming Wednesday for the Random Blog!!

Gwen
Posted by Gwendolyn Cease at 9:00 AM