I can pretty much tell you this week has been the fucking lousiest week I've had since my mom died. It was tons worse than losing my job or deciding not to be a classroom teacher anymore. The idea of letting go of someone we love is immense. It doesn't matter who that someone is, whether he or she has two feet or four, when it's time to say good-bye the emotions are overwhelming. 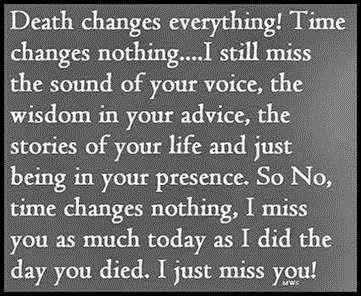 I had to learn at an early age to let go. My first pet Susie, a fabulous German shepherd, died when I was probably 4. I have pictures of us together and stories my mom told me, but no solid real memories. I know that we used to play "Ring Around the Rosie" together. Apparently, I would grab her tail and she would take my arm in her mouth and we would go around in circles as I sang. Then at the end we would both fall down. 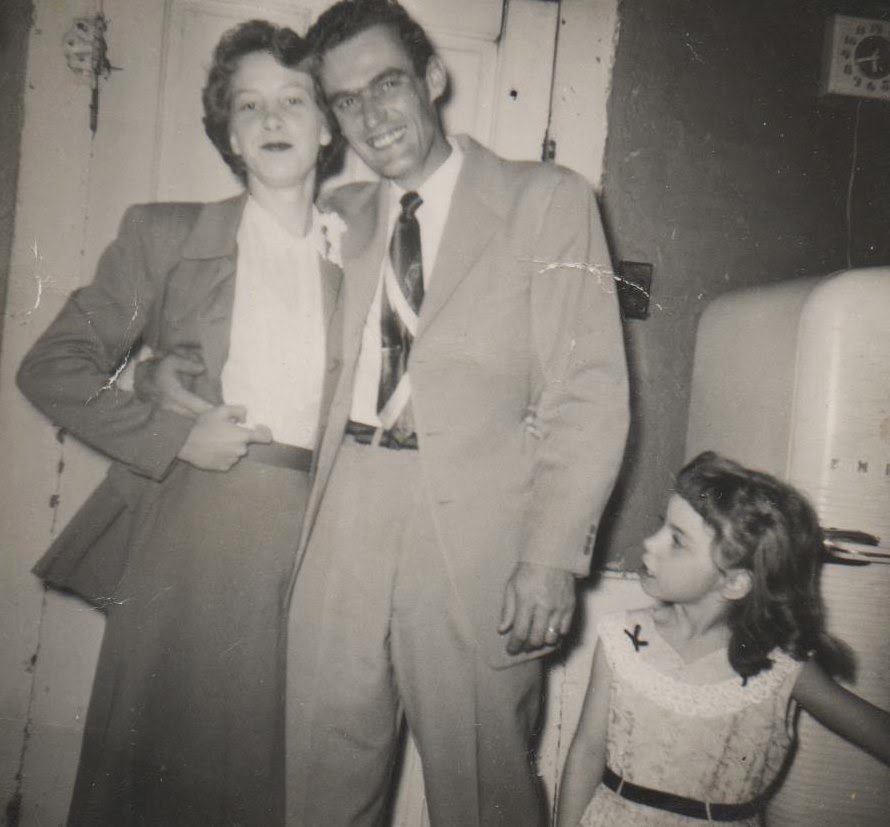 My Aunt Aileen and Uncle Ches

I had to let go again when I was 12. My wonderful, amazing uncle and godfather, Chesley Jamison, got cancer and died. It was the first funeral I attended where I really knew the person. Unfortunately, it wouldn't be my last. At 19 I lost my father to cancer. If you've read some of my other posts you know he was an alcoholic and there were issues in the family, but it doesn't matter. He was my dad and he was gone. 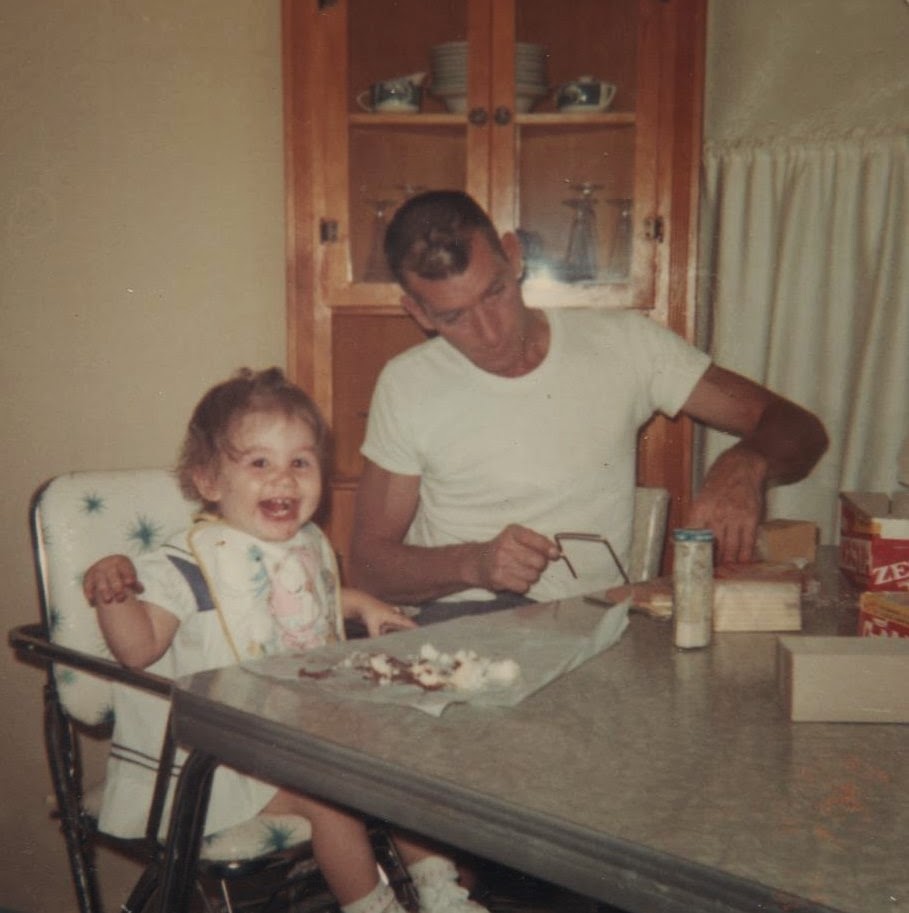 Me and my Dad

Less than 6 months later I had to let go of my sweet loving sheltie, Lady. I'd had her since the first grade and she was my comfort when dad died. I told her things I had never told anyone and she listened and kept all my secrets. After her, I lost both grandmothers. My Gramma Jamison was the hardest since I was so much closer to her. 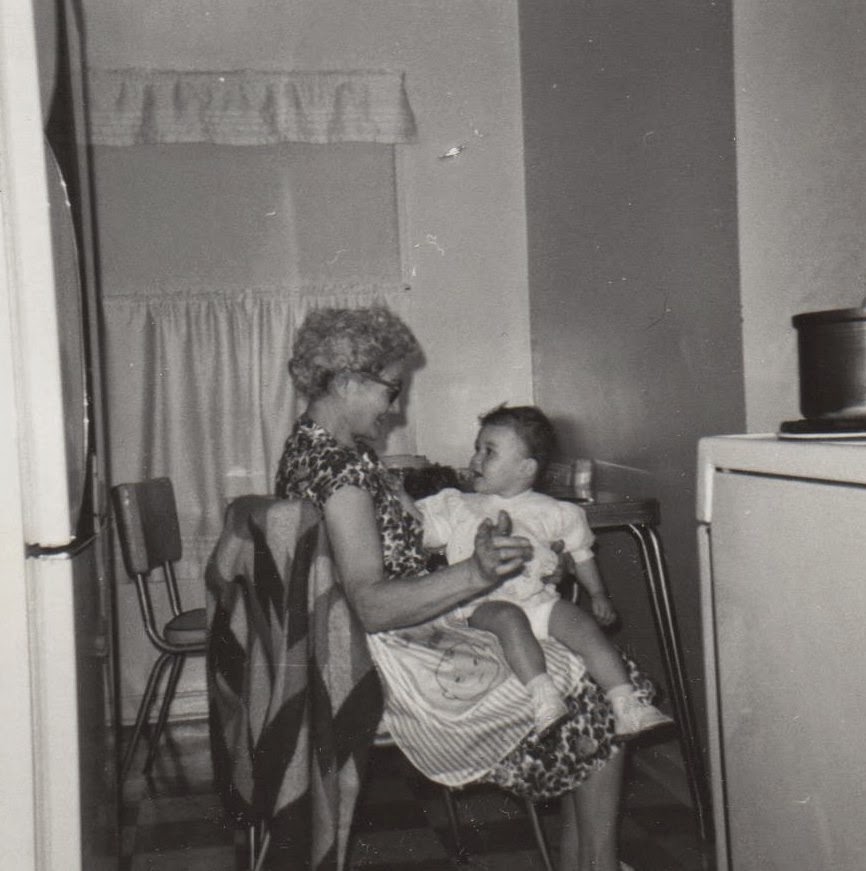 I got a puppy, a beautiful black lab/Irish setter mix and named her Pagan. She was so smart and so much fun. But, as anyone who has fur-babies knows, they don't live long. So when she was 14 I had to let go again. After that I swore I'd never ever get another pet. It was too difficult this constant letting go.

I lied. My friend Jennifer talked me into going with her to the humane society to look at cats. I had never owned a cat before . .. or perhaps a cat had never owned me before. But I went and that's where I fell in love with a beautiful calico girl I named Fiona. She sat on my lap all the time, kissed my tears away, and slept with me every night. Because I had her, I was open when we found a tiny kitten in a mall parking lot. He probably wasn't even 6 weeks old. I packed him up and brought him home and named him Max. A year later, I rescued another cat from the small town I taught in and named him Warlock. Somewhere in this craziness my cousin talked me into taking in a dog she'd rescued. Lucy was a golden retriever/rhodesian mix (can you say 100 pounds of fury??) But she really wasn't since the cats kind of raised her so she thought she was a cat.

There I was with 4 fur-babies! My poor Mom finally begged me not to bring anyone else home. Max became her cat. He slept with her and sat on her lap all the time. Fiona was getting older and didn't want to be bothered much but she did deign to sit on our laps occasionally. Warlock, on the other hand, became my shadow. He followed me from room to room, sat with me constantly, waited by the door for me to come home, came to the bathroom with me, and slept with me. He was my Mister Boo, my Lockster Boy, my Mr. Fuzzypants. 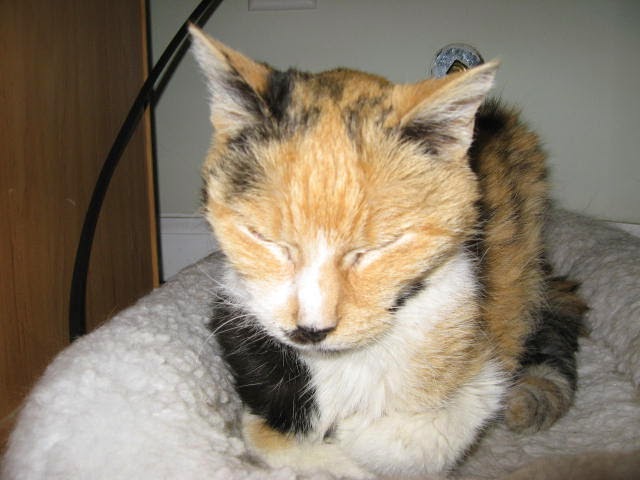 When Fiona was about 16 or so, I once again had to let go. I knew she was ready. She was in pain and had stopped eating and drinking. It didn't make the goodbye any easier, but I understood it. Lucy, on the other hand, I didn't understand. She was 5 and ended up with an auto-immune disorder. I did everything I could. Took her to specialists, gave her a billion different kinds of medicine and still I had to let go.

Barely a year after that in 2010, my Mom had a massive stroke. My sister and I were devastated. She was our rock, the one person who loved us unconditionally, our support. In less than a week, she was gone and I had to learn to let go again. The week she was in the hospital and the next week of her funeral was horrible. I came home every night and cried, but Warlock was right there with me. He laid on me, purred and it was such a comfort. 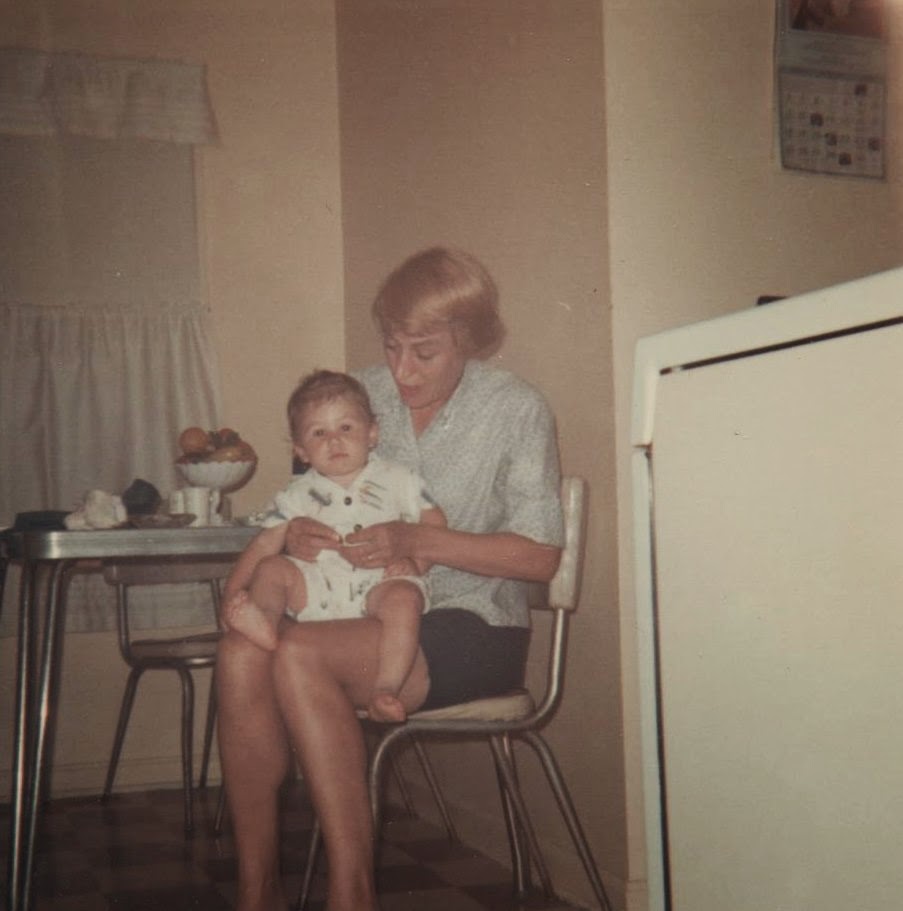 Max is almost 12 and he'd been having health problems. He has thyroid issues, which caused him to lose a ton of weight. For a while, he stopped eating so I was force feeding him. Then, miraculously he began eating on his own. I knew, in my head and heart, he would probably be with me another year tops so I was preparing myself. Spending tons of time with him and babying him. 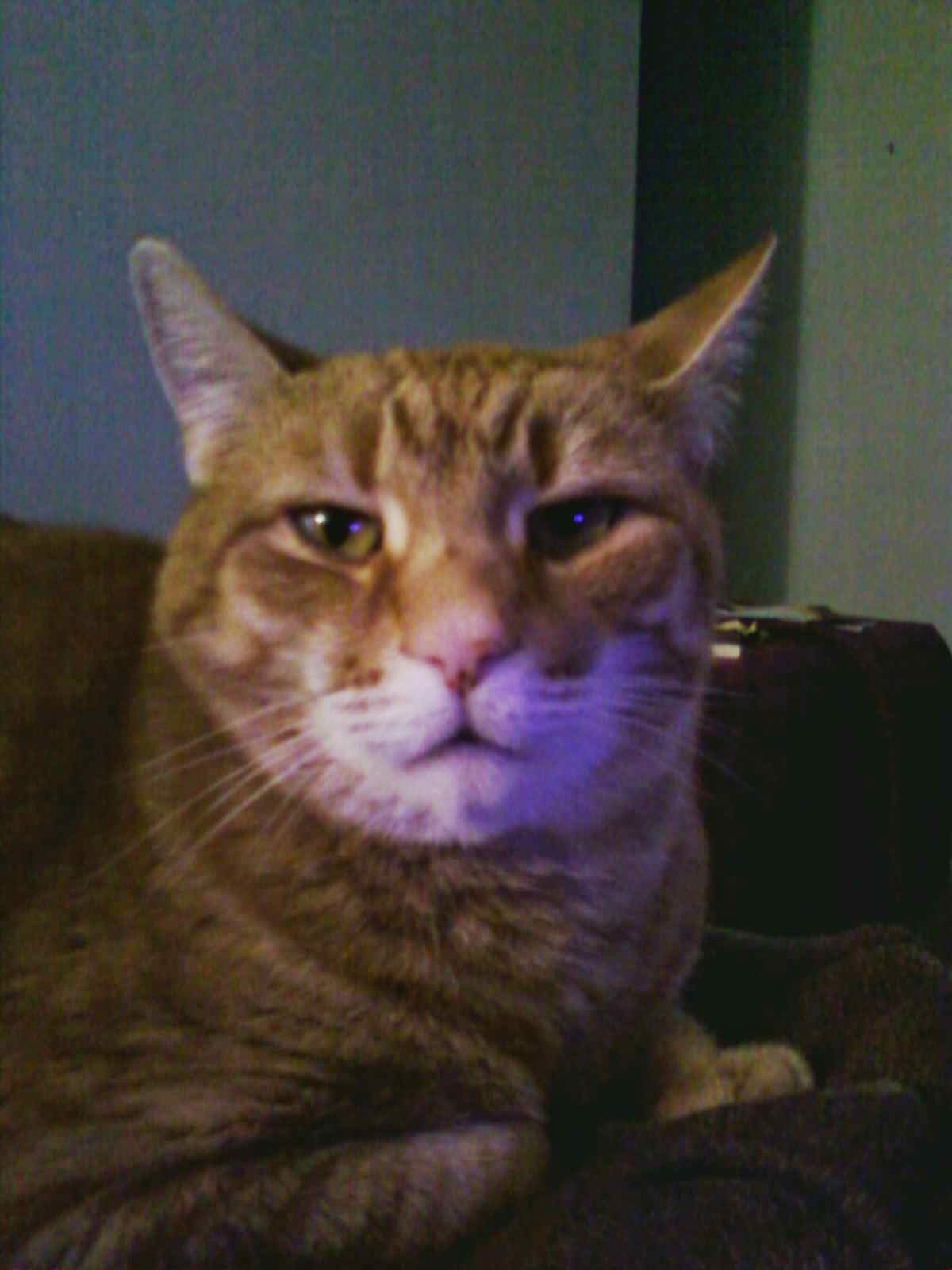 Ah yes, but you know what they say about the best laid plans. Yeah, they're for shit. So this past weekend I noticed Warlock wasn't acting like himself. He just seemed off. He was still with me at night, but there was just something. He was quieter, not chasing the other cats. On Wednesday, I watched him walk in and out of the litterbox about 3 times but didn't hear anything going on. I felt on his belly and he cried. I thought he might not be able to pee. Max had that. So I instantly packed him up and took him to the vet. Dr. Wood felt on him and said his bladder was enlarged. They would cath him and bingo he'd be feeling better. I hated to leave him, but she promised me he'd be back to normal probably Friday. She was wrong.

She called me less than 40 minutes later to tell me it wasn't his bladder. There was some kind of mass in his stomach. My sister and I raced to get him and take him to the big specialist hospital where they could do an ultrasound. They found a tumor of some kind, but didn't know what it was. I okayed my baby for exploratory surgery the next day so we could figure this out. I got the call the next day that Warlock, my baby, had cancer all through his body. What?? How the fuck did this happen? He was fine and now he's not? The surgeon wanted to know what I wanted to do. Umm, make my baby better so I can bring him home. So he can lay on my chest so close to my face that I can feel his breath and get tickled by his whiskers. 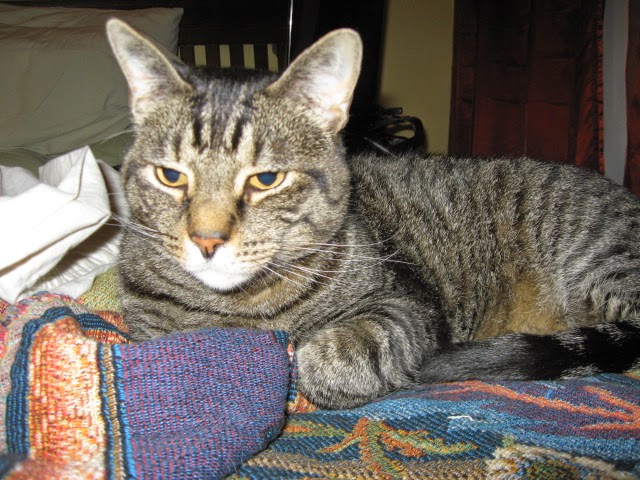 That wasn't a real option. If I brought him home he might have had 2 weeks tops. Two weeks where it he wouldn't be able to pee because the tumor was compressing his kidney. Two weeks where there would probably be pain. For what? So I could be selfish and have him home with me. Can I tell you that I wanted to say yes to this. But I knew it wasn't fair. So they just didn't wake him up. He went peacefully in his sleep. And again I had to let go. But this was hard, the hardest since my Mom. I think it's because there was no time. I wasn't prepared. I mean, he's my healthy guy. He's not even 10 yet. He hasn't been sick. 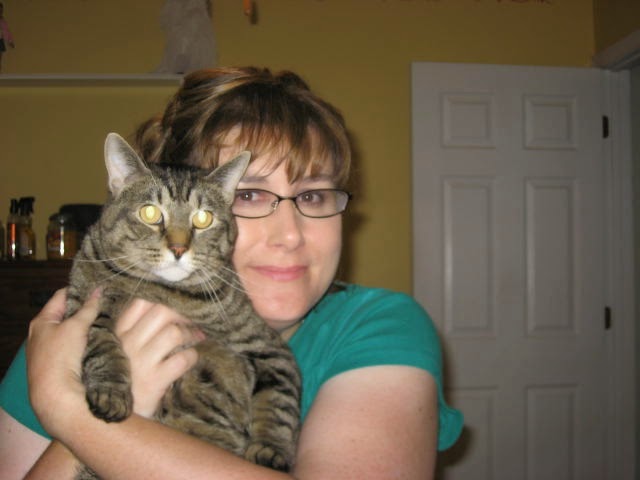 The pain is enormous. The sadness and loss is deep. And I'm sure there are those of you out there that say, "What the hell? He was a cat. Get over it." But guess what, not to me he wasn't. I don't have kids, I never wanted kids. My fur-babies are my kids. I love them and take care of them and they give so much back. To have to let Warlock go before I was prepared is staggering.

Letting go sucks. I'm struggling with it even though he's gone. But since I wasn't with him it doesn't feel real. Sometimes, I imagine I'll call for him and he'll come running. Or I feel the bed move and think it's him. Now it's just me and Max. And I know soon I'll have to let go again.
Posted by Gwendolyn Cease at 12:43 AM