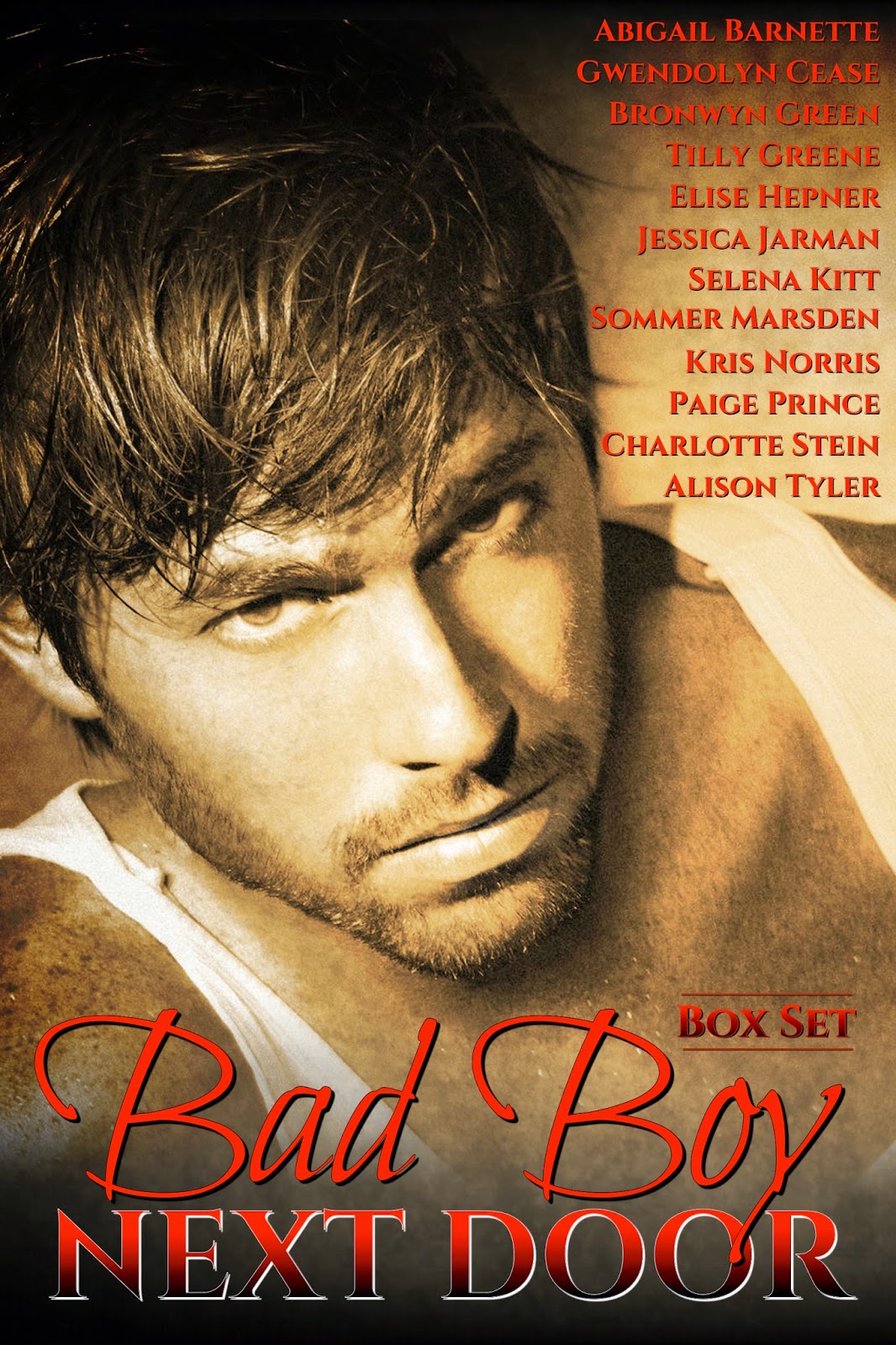 
There’s just something about a bad boy… It could be that neighbor you’ve had the hots for forever. Or maybe the guy in the cabin or office next door. It might even be a guy you meet on vacation or one you’ve known since you were a kid.


Newly independent real-life adult Ellie McCormack loves everything about her first apartment…except her neighbor. His bi-weekly sex fests keep her up at night in more ways than one as she wonders about the man who’s making all the noise—and what he’s doing to make his women so damn loud.


But even her wildest fantasies couldn’t conjure up a man like Antony DeLuca. When she works up the nerve to confront him, she’s expecting a player, but there’s more to Antony than his carefree sexual escapades. One hot night with him helps Ellie see through the man who drives women wild, to the good guy beneath it all. A guy that she just might be able to fall for…


All Kaitlin O’Neal wants to do is fix her sink. She’s intelligent and resourceful. Plus, she’s got her own tools. How hard could it be? Apparently, extremely hard, since her attempt left the sink in an unusable condition. When her next-door neighbor, Cameron Sinclair, offers to help her fix the mess and renovate the rest of the kitchen, she jumps at the chance. She’d be a fool not to, right? Cameron, though, is hotter than hot and makes her an offer she can’t refuse.


Cameron has wanted Kaitlin since she moved next door. So what if she’s older than him? She’s beautiful, sexy, and he wants to get to know her better. He offers her a no strings affair—one he hopes will keep her coming back to his bed. Between home improvements and steamy sex, Cameron realizes that their no strings fling will never be enough, but can he convince Kaitlin he’s worth the risk?


Tristan Weaver, accountant for a successful video game company, is in way over her head. Honestly answering a company-wide survey and criticizing the sexist stereotypes used in the company’s games was enough to catch her boss’ attention. But speculating on his sex life within his earshot has unexpected consequences when her hot, but nerdy, boss invites her to model for him.


Owner, artist and lead developer of Brecken Games, Rory Brecken, has a strict no fraternizing with employees rule. However, when he overhears Tristan’s conversation with her friend about his rumored kinks and begins to suspect her curiosity in the submissive side of sex, he’s more than a little tempted. When her interest is undeniably confirmed, he suggests a onetime only, colleagues with benefits hook-up.


Though neither want a relationship, once isn’t enough for either one of them. As their encounters become more intense, Rory makes a huge mistake that may cost him the woman he’s coming to love.


Mike Mulligan co-owns a garage and fixes cars. He rides a Harley, is covered in tattoos and has spent time in jail. Since being released he’s tried to live a clean life, but he’s a bad boy with women, very bad and terribly sexy. Bondage, domination, and so much more, are his preferences when playing with the ladies, and there have been a variety until the last one.


For the first time, he had to work for a yes. All summer, they’ve had fabulously wild no-holds-barred sex, but one morning everything changes. With chaos in the garage, a cup of coffee in hand, and a half-naked Sherry Gonzales in his lap, his eyes are opened to wanting more than sex with her. Mike’s solution is to go on a date, their first date.


The night starts out fine. But things get wicked on the back of his bike before taking a turn, but for the good or bad?


Elise Hepner – A Marriage of Inconvenience


When Izzy Thorton's mother falls ill and is given a terminal diagnosis the last thing Izzy anticipates is a proposal from her best friend, Sebastian Leery, to fulfill her mother's dying wish. Only one snafu keeps Izzy from saying yes—she's in love with him. But before she can say much of anything to his proposal, Bash takes the reins by telling her mother the good news.


Unable to fight her undeniable attraction to her playboy best friend—Izzy goes through with the best and worst mistake of her life. No sooner are the rings exchanged when they both realize their friendship can only bridge so many gaps. Sebastian has no hope of keeping his skeletons in the closet and Izzy doesn't know how much longer she can keep her heart out of the equation.


Together they fumble through the darkness of their past to a future that might just be a little more clear--if they can fight their chemistry long enough to talk.


After losing her husband six years ago, Meg Stevens has focused on the day-to-day and being a mother, not sparing a thought for anything beyond—no dates, no excitement, no life other than what she already had. A six-week vacation to London, all but forced on her by her two children, changes all of that. Meg meets the man of her dreams—gorgeous, dominant, and completely on board with a short-term fling—despite the fact he’s far too young for her.


Nathan Harris is more than a bit curious about the beautiful woman renting the upstairs flat, and once he talks to her, curiosity is quickly replaced by arousal and desire. It doesn’t take long before it’s clear she longs to experience sexual submission, and Nathan finds himself desperate to be the one she submits to.


Her days spent exploring the city, her nights exploring Nathan and the pleasure submitting to him brings, Meg discovers the trip she’d taken out of obligation has turned into something she doesn’t want to walk away from. However, the life she left behind beckons, and there’s no room there for dreaming of something she can never have.


Selena Kitt – Working for the Weigands


Lloyd “Boone” Goodhart has been working for the Weigands since he was in high school, mowing their ornamental lawn, shoveling their long, winding driveway and skimming their enormous in-ground pool for extra cash, much of which he gives to his mom, a single-mother who has worked in the Wal-Mart bakery for twenty years. Boone, more apathetic cynic than true slacker, is also attending community college, bagging groceries at a local supermarket, and rebuilding his dead-beat dad’s old Harley.


His second summer after high school graduation starts out just as mundane and routine as the first, but Boone’s world turns upside down when Mrs. Weigand tells him her husband has left her, and her daughter has returned from boarding school in Europe, where Danielle “Ellie” Weigand has spent the past five years.


Before he knows which way is up, Mrs. Weigand starts requesting extra services of Boone—in more ways than one—while her daughter, Ellie, teases him mercilessly, just like she did in junior high. He soon finds himself immersed in a desperate, passionate affair, with not just one woman, but two.


Kylie Walker is cracking under the stress of hosting a thirtieth anniversary party for her parents and trying to keep up with her freelance writing deadlines. With a new house, a well-meaning but useless sister, and roughly forty people about to descend on her home, she doesn’t think it can get much worse. Until her mother’s friend, Mrs. Sinclair, calls to ask if they might bring one more person. Her son, Wade. The man who up and left Kylie eight years before.


Wade Sinclair has come back to town with one hope—to make things right with his high school sweetheart. Still hopelessly in love with Kylie, Wade knows he must come clean about why he left her all those years ago so he can finally set about reclaiming what he never should have let go of in the first place—her love.


Can they put their past behind them and look toward the future? Or will the anniversary party be the end of them altogether?


Conservation Officer, Finley McKay, isn’t a stranger to criticism. Taking risks to protect delicate ecosystems doesn’t impress most people—including the doctor renting the cabin beside hers. The man’s arrogant, opinionated and far too sexy in his faded jeans and tees. She already knows he’s an ass—she just wished it mattered enough to make her keep her distance.


Dr. Coen Brady isn’t looking to fit in. Having recently retired from the military, he’s hoping to spend a few months hiding from the world in a small, out-of-the-way town in northern Washington.


But just his luck, he has the misfortune of running into his next-door neighbor. A girl who seems determined to get herself killed before his time there is up. She’s reckless, stubborn and slowly driving him insane.


When anger morphs into angry sex, Coen knows taking her to bed is a calculated risk—one he might regret when her investigation turns deadly, leaving Finley’s life hanging in the balance. Breaking a few rules to keep her in the game doesn’t seem that dangerous, until it becomes painfully obvious she won’t stop until justice is served—even if the price is her life.


Danielle Almasi-Epperson's parents were killed in a tragic car accident when she was eight years old, leaving her world famous, Egyptologist grandfather to raise her in their stead. While she had the pleasure of growing up on archaeological digs, he never believed that the field was a woman's place. All she's ever dreamed of is adventure and the kind of love her parents had.


Jareth Riley was the boy in the tent next door to Danielle's at every dig she could remember while growing up. Her grandfather and his father labeled him a troublemaker from day one. So, when Danielle and Jareth fall in love and lose their virginity to each other, it takes no time at all for her grandfather to ship her off to Harvard.


Ten years later, she's working as a curator at a museum and he's a treasure hunter. When he shows up on her doorstep asking for help to find a lost artifact with supposed mystical powers, she can't help but say yes. In no time at all, they're on the run from mad men with guns and rekindling the romance that had never quite died. Will they be able to restore the lost treasure to the rightful owners, or will they destroy their chance at happiness or lose their lives in the attempt?


When Judy Myers is offered a relaxing vacation to get away from her latest heartbreak, she can’t say no. A cruise on her brother’s yacht sounds like heaven...until she realizes her brother’s best friend has been invited along for the ride.


Steven Stark is big, he’s loud, and he’s obviously not interested in the plump, plain little sister he used to tease unmercifully. In fact, he’s still quite happy to tease her – until she turns the tables on him. Now, Steven can’t seem to keep his thoughts, or his hands, to himself. And worse, Judy’s not sure she can resist the attraction she’s kept buried for so many years.


Being trapped on a boat isn’t the best place to be, when you’re suddenly thrown a hunky curveball.


The Spanking House is a fantastical tale of a writer struggling against the beast known as "writer's block." Mia Rogers rents a cozy cottage in a small town in hopes of jumpstarting the novel she can't seem to finish. When she meets Tripp Johnson, she becomes motivated in ways she previously hadn't thought possible.
Posted by Gwendolyn Cease at 7:00 AM