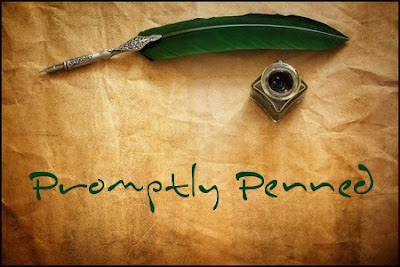 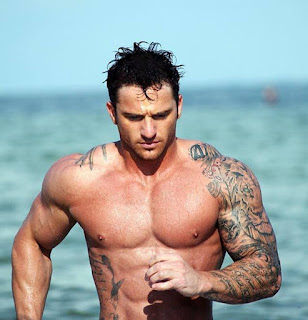 Hello, and welcome to May's Promptly Penned. If you've never read this before it's where a prompt is given to all the bloggers and we try to create a story around it. The man above is for Male Hotness Wednesday, just my small service to perk up whoever reads my blog. So, let's get started.

Magic isn't all it's cracked up to be. For example, there are 20 spells for making tea but none to save yourself from falling off a cliff. I know this first-hand. Okay, so I wasn’t falling off a cliff, but I was dangling from a sickly tree that happened to be about ten feet down a cliff. How did I get here, you ask? That was a huge story better left for another day. Suffice it to say, that I was here, clutching a tree branch that I knew wasn’t going to hold me much longer.
Closing my eyes, I quickly flipped through the spells I had memorized. And, again, I had nothing. Hey, it’s not my fault, not really. I was learning this gig by the seat of my pants and not really doing a great job of it.
“Tara, what are you doing?”
I looked up to find my best friend Jace peering over the edge of the cliff at me. Of course, he’d be the one to find me. Wouldn’t you figure?
“Nothing, I just wanted some alone time.”
I heard a snorting laugh, then a rope appeared beside me. As I reached to grab it the tree creaked ominously and slowly began to bend. Not stopping to think, I lunged at the rope as the tree roots pulled away from the cliff and my perch dropped into space. Closing my eyes, I clung to the rope remembering all those failed attempts to climb in gym class. I was the girl who couldn’t even make it five feet off the ground before my arms gave out and I dropped to the floor. This time though, I wouldn’t feel embarrassed because of the failure, I’d be dead.
“I’ve got you,” Jace called as I slowly began to rise.
All I had to do was hold on. Humiliating yes, but I wouldn’t die from it. And not dying was really important right now.
Finally, I felt his hands grasp mine as I was hauled over the edge and back onto firm ground. Clenching my jaw so my teeth wouldn’t chatter, I tried to get control. I hadn’t died so I wasn’t sure why I was panicking now. It made no sense.
Jace wrapped me in his arms and held me tight as I tried to get my shaking under control. I wished I could shove him off and flounce away, but I wasn’t a flouncer and his arms felt so good. That was another deep dark secret. I lusted after my best friend. Sue me, he’s tall, dark and utterly handsome. Of course, he thought of me just as a friend and I didn’t want to mess our relationship up by trying to make a play for him. Besides, he had a girlfriend. An amazingly gorgeous, model thin girlfriend.
“What were you doing?” he asked, his lips right next to my ear.
For a moment, I just enjoyed the sensation of his warm breath flickering over skin, before I forced myself to snap out of it. Knock it off, stupid, I told my hormones.
“I was practicing my spell work and somehow ended up hanging off a cliff. I don’t know how. That’s not what the spell was. Hell, if it had been, I certainly wouldn’t have tried it.”
A long moment of silence greeted my pronouncement and I pushed away from him so I could look into his eyes. His amazing green eyes. Okay, hormones, that’s enough.
“You have to promise me not to do this again.”
“I wasn’t planning on doing it the first time.”
He nodded. “I get that, but from now on, when you practice I want to be there. Think of me like your…spotter.”
I laughed. “Yeah, I don’t have a clue what you’re talking about.”
“When people lift weights, you have someone close in case something goes wrong.”
“Oh, yeah exercise, no wonder I didn’t understand. Between that and sportball I got nothing.”
“Tara concentrate. You will not practice without me there spotting for you. Promise.”
“I don’t want to impose on you.”
“Tara,” his voice dropped even lower and he started at me.
Well hell my panties were getting wet. Really? All the man had to do was say my name, in that tone, and I was ready to fall onto the ground and let him have his way with me? Stupid hormones.
When he continued to stare, I finally nodded. “Yes, I understand.”
He’d get bored. There was no way he was going to come and hang out at my house every day. He had things to do, like a stupid girlfriend.

If you enjoyed this go check out Bronwyn, Jessica, Kris, Siobhan, and Deelylah to see what they have come up with.