Inside Looking Out Pt 2 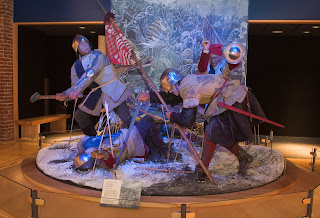 Okay, so I'm back again to talk about my totally cool job at The Frazier History Museum. One of the coolest things about the museum are the tableaux that you can find all throughout the floors. I'm sure you are asking about now, "Gwen, what is a tableau?" And I am here to tell you that they are life-like figures that represent moments in history. Such as the one to the left, which represents the Battle of Towton. They are made from fiberglass, but let me tell you if you couldn't touch them (which you can't cause you don't work here) you'd think they were real. :-)
I often get children that come up and tell me the figures move. My first response is the pat thing about not having a cool Egyptian tablet like Night at the Museum so they can't move. They are fake, blah, blah, blah. But sometimes I get those persistent kids that listen, somewhat impatiently, to this line of bull and still tell me the figures moved. One kid told me that a figure winked at him even after I explained that there was no way since the figures are not alive. When he still kept tell me it winked, I of course did the totally adult things and said, "Well did you wink back?" He thought briefly and said, "No." My reply, "Well next time just wink. He gets bored and likes to make friends." He's satisfied, I'm satisfied, life moves on.
So the next time you go into a museum and find they have tableaux. Wink at them. They get lonely and just want to be noticed.
Posted by Gwendolyn Cease at 11:37 AM